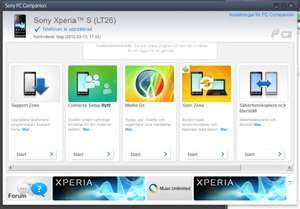 “Application that acts as a portal to Sony Xperia”

A review of Sony PC Companion by Sven Sørensen

The Sony PC Companion is the continuation of the software provided by Sony Ericsson before Sony took over the entire mobile division. It acts as a gateway between Sony Mobile phones such as the Xperia and your Windows PC.

One cool thing that stands out with the newest versions of Sony Mobile PC Companion is the ability to migrate from iPhone to Xperia. It allows you to transfer your contacts and multimedia files to your new Sony Xperia phone.

In addition to iPhone migration, PC Companion allows you to transfer files between your PC and phone, synchronize data, perform updates on contact information and much of what previous versions of Sony Ericsson software allowed. It also has a handy backup and restore tool.

When comparing PC Companion to other similar tools available like Samsung New PC Suite, the layout is pretty familiar as they all seem to offer similar features.

With this tool, you're also able to perform phone software updates and when supported, upgrade your Sony phone to the latest version of the Google Android operating system.

This download is licensed as freeware for the Windows (32-bit and 64-bit) operating system on a laptop or desktop PC from mobile phone tools without restrictions. Sony PC Companion 4.1.100.1332 is available to all software users as a free download for Windows 10 PCs but also without a hitch on Windows 7 and Windows 8.

Compatibility with this software may vary, but will generally run fine under Microsoft Windows 10, Windows 8, Windows 8.1, Windows 7, Windows Vista and Windows XP on either a 32-bit or 64-bit setup. A separate x64 version of Sony PC Companion may be available from Sony.